Beauty boss who lived party girl lifestyle before she was caught with £1.5m of cocaine is ordered to repay just £41

Betty Cooper and Jughead Jones on The CW’s Riverdale

This time, Medusa is the one slaying the snakes.

A statue of the Greek mythological figure clutching a severed head was unveiled Tuesday as a tribute to the #MeToo movement near the Manhattan courthouse where rapist Harvey Weinstein was convicted.

“This is more than a dream, it’s unimaginable,” said Argentine-Italian artist Luciano Garbati, who reinvisioned the snake-haired Medusa, turning her ancient story on its head by making her the victor against the hero Perseus.

The 1000-pound figure — which will be left in place by the artist for six months — seems to relish in her win, as she stands proudly with a solemn gaze, sword in one hand, and the head in another.

“She is alive after the battle with Perseus and that is significant,” Garbati said. “According to the myth, she should be the one dead and beheaded. That’s the most important thing you can say about this sculpture but also that she has defended her life and set a boundary.”

According to Greek mythology, Medusa was raped by the powerful God Poseidon but instead of Poseidon being punished, Medusa was blamed and turned into a monstrous beast with snakes for hair, as well as a gaze that could turn men into stone.

She was exiled and later hunted down by Perseus, who then displayed her head on his shield as a trophy.

Spectators clapped and cheered as Garbati uncovered a new symbol of indomitable strength. 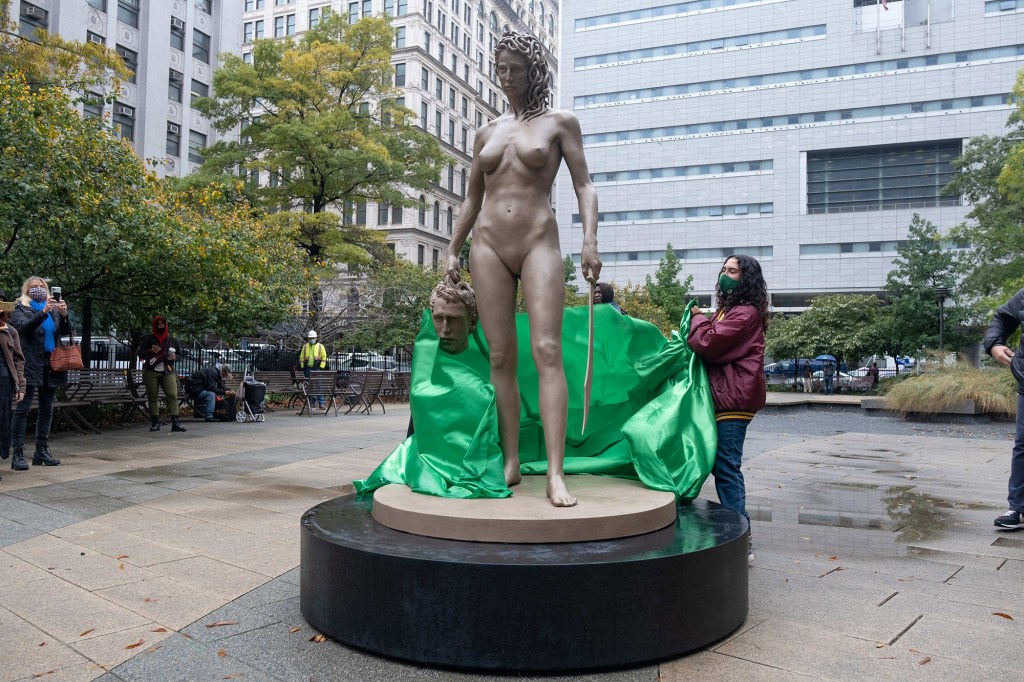 “She’s sexy,” said Iris Jones, 46, who paused to admire the figure. “She has a man’s head in her hand and is saying enough is enough. I love it.”

Adriana Sanchez, 48, of Atlanta, said she planned to stop by with her 13-year-old daughter Isadri Hernandez-Sanchez, who had been learning about the gorgon in school.

“My whole life I thought she was the evil one but it makes me angry to know she was punished for no fault of her own,” Adriana said. “I’m so happy I could be here.”

“It’s a different version of her and it’s more powerful,” Isadri added.

Garbati specifically chose to display her in the park near various courthouses. The Manhattan Supreme Court where she is now displayed was were Weinstein, the former movie mogul, was sentenced to 23 years in prison on March 11 for rape and other crimes.

“The image has been related to justice and there is no better place for her to be,” Garbati said.

“What I hope she represents is surviving assault,” added Bek Andersen, who is the founder of the Medusa With The Head Project and worked with Garbati to bring the work to New York City.

“Surviving assault is nothing to be ashamed of.”

“Medusa can help put a vision in people’s minds that there is no shame in speaking out, defending yourself and demanding justice.”

Garbati said he received hundreds of messages from women who emotionally connected to his Medusa.

“If emotions are involved in the appreciation of a work of art then you have succeeded,” Garbati said.